Active since 1908, the Fontanini company keeping to the old tradition of Lucchesi figurine designer now produce subjects of unique expression and accurately modelled. Generations devoted to the creation of nativity sets and different figures, marked by a plasticity played on the intensity of faces and the of movement and details. Nativity set figurines and angels are evidence of this type of creation : each piece is hand painted, of different sizes from few centimetres to big dimensions, are symbol of happiness and sweetness, bearing a message of peace and indicating a brotherly friendship.

The steps of the production process of a Fontanini figure are essentially four: sculpture, creation of the mould, moulding and painting. A high craftsmanship process, which has not changed since in the post-World War II century the PVC material was introduced for the pieces, which guarantees the warmth and expressiveness typical of Fontanini's creations.

The first model of each piece of Fontanini craft creation is carved in plastiline or clay and it is just rough cast of the actual sculpture that will then be in beeswax.

The artist has previously agreed with the company the general characters and dimensions of the figure, but works independently and with extreme attention to detail.

Elio Simonetti, the most important sculptor with whom the Fontanini company collaborated. 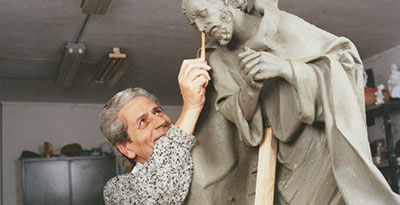 Development of a metal mould 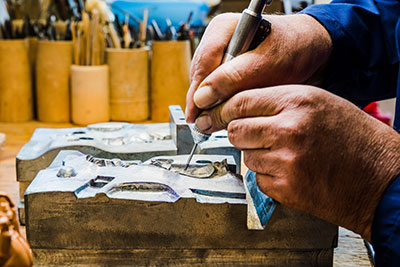 Once the wax model is completed and approved, the actual manual construction of the mould begins. Using clay, the moulder ( so called for making it manually) works as if it were a sculpture, on one of the two parts which make up the mould. He does this by outlining the wax model with clay, adding on layer by layer, thus creating a box. He then repeats this on the other half of the mould.

The two parts are then "boxed" with glass lining to create a small tank, and a particular type of plaster, resistant to high temperature and breakage, is then cast inside.

The two gypsum moulds thus obtained are used for the last step of the process, in which a metal alloy is melted and poured over the plaster to finally obtain the actual mould.

Before entering into production, the mould is mechanically prepared in the company's workshop; It is then tried out and tested before taking it to a chiseller for the final finishing of the last details.

The items produced by Fontanini are mainly pressed in PVC. This polymer, prepared on precise technical indications of the company, is truly unique. Its plasticity allows to capture all the details of the original figure as reported in the mould. At the same time it is extremely resistant to scratches or breakages, as well as being infinitely recyclable.

After melting, the PVC it is injected at very high pressure and temperature. Therefore, after a brief period of cooling, the piece obtained is removed from the pressing machine, carefully examined and placed in a basin of cold running water, to cool down completely. 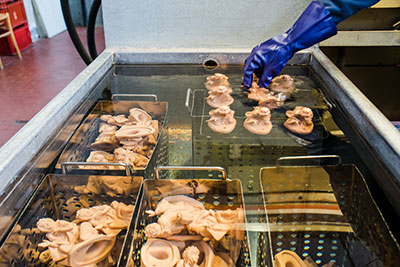 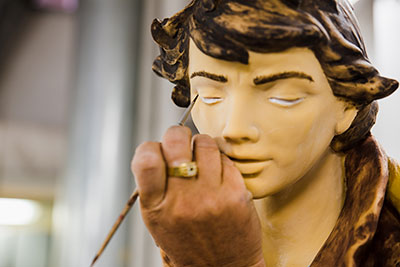 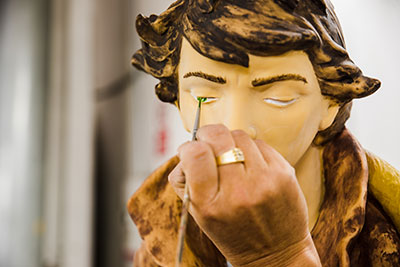 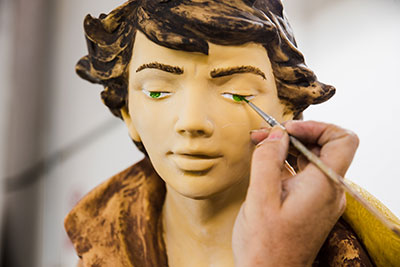 At this point, after a carefull inspection, the unfinished pieces are distributed to the artisans for decoration.

The painting is completely hand made and this is probably the most fascinating moment of the process, and is part of the ancient tradition of "figurine painting" for which the countries of the Lucchesi hills are famous all over the world.

Today many families are still envolved in this activity, whose origins date back to at least the mid-eighteenth century.

Buy now and get free shipping to almost all of Europe on orders over € 100
In all other cases, our shipping fees are always very low
SEE MORE